Getting Rid of the Grand Gala: Lessons for the Field 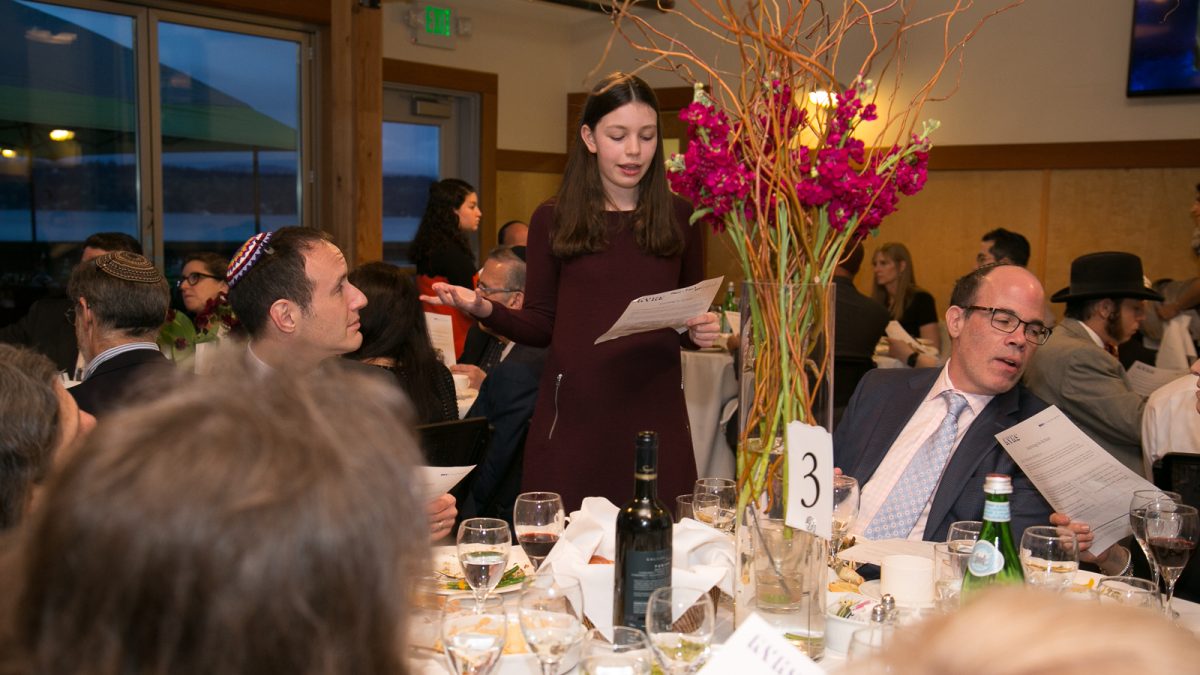 By Deanne Etsekson and Melissa Rivkin

Over the past week in Seattle, fundraising galas, dinners and luncheons have been cancelled at a dizzying rate due to the state mandate against gathering in large groups in the hope of curtailing the spread of the COVID-19 virus. Purim services were held online or outdoors, Shabbat kiddushim were canceled, congregants were told to practice “social distancing.” Schools prepared for distance learning. All this came about while we were contemplating two of our local Jewish schools’ efforts to eliminate their fundraising galas. While only time will tell how the current health crisis will impact our Jewish schools, for now we know that most, if not all, of the organizations in Seattle have had to cancel their major upcoming fundraisers.

From December through May during normal times, Seattle day schools compete for attention, tzedakah dollars and volunteer hours with dinners, galas and casino nights. In Seattle, we have more Jewish day schools per capita than in most cities. Our schools have to get creative to raise funds where the pie is sliced thinner and thinner.

Torah Day School, an Orthodox school with an enrollment of 75 students in K-8, decided to venture into unknown fundraising waters this past December. Like most schools, they used to hold a fundraising gala in a hotel or event space for over 200 people. Depending on the year, they would collect tribute ads, hold raffles, auctions or a “raise the paddle” during the dinner by asking attendees to raise their bid cards with a pledge.

On average, they raised $220,000. Though they felt their efforts were successful, the toll on the professional staff and lay leadership was immense. The head of school, Rabbi Yona Margolese, recognized that the value of the gala extended beyond fundraising to include community building and showcasing the school. Yet the amount of effort to put on a gala often came at the expense of maximizing the time needed to run the school. Torah Day School doesn’t have a development director. The fundraising efforts are coordinated solely by Margolese, his board members, administrative team and volunteers.

This year, Torah Day School decided to eliminate the dinner and create a 24-hour campaign with the theme of a “Dinnerless Dinner.” They “served” a multi-course virtual dinner from the command center at the school. Slides and student videos were sent out for each “course” as volunteers called and emailed past donors and their personal contacts. Together they worked to generate excitement by announcing each gift out loud and creating a vibe of “energy and pressure.”

Although the actual fundraising happened over a 24-hour period, the planning and setup took place over several months. Margolese said that this was essential to ensure that during the 24-hour period, everyone, from the administrators, board members, volunteers, faculty, staff and students, knew their important role. The final push included a “dessert,” when they continued fundraising after meeting their goal. With the help of pre-solicited 3:1 matching gifts from some of their closest and generous supporters, the event raised a total of $369,000. An added bonus was the fact that the excitement and buzz generated by this virtual campaign extended far beyond the local donor base and brought new donors and friends into the Torah Day School fold.

In order to ensure that the community-gathering element of the gala wasn’t lost entirely with the Dinnerless Dinner, Torah Day School hosted a Student Spotlight Open House for the whole community on campus two weeks prior to the fundraiser. The event involved all of the students and teachers and was an opportunity for members of the community to walk through the school with student guides to highlight learning. As the open house was right before Chanukah, Torah Day School cleverly employed the theme “spotlight” to illuminate student activities and learning.

NYHS is a small high school with 45 students in grades 9-12. Like all Seattle day schools, it has experienced enrollment decline since the early 2000s. After assessing their fundraising capabilities with then-director of institutional advancement, Melissa Rivkin, they agreed that a gala was not an efficient use of their limited resources. Typically, the gala raised over $200,000 between ad journal entries and a raise the paddle. It drew some 300 attendees. Upon analysis, it was shown that only 100 attendees actually contributed tzedakah to the school. Over the years, attendees would also complain about the high ticket price, which averaged around $135 per person, none tax-deductible.

Could there be a better way? If the goal was to raise money and friends, could they do it better?

In a bold, first year move, Feld gave up the gala and replaced it with several “friendraising” dinners that did not include a major fundraising component, and a focused Major Donor Leadership Dinner with a significantly higher ticket price that was largely tax-deductible. They planned for 80-90 guests rather than the 300 of a typical gala.

In its inaugural year, the Leadership Dinner committee grappled with the issues of school culture, change management and community customs. There were community members who expressed their displeasure at being priced out. Committed to the new model, the staff, board and volunteers acknowledged to anyone who expressed their displeasure that they understood that change was difficult and encouraged them to attend other school community events, including an all-school Shabbat dinner, a Shabbaton and visiting scholar dinners with very low ticket prices. These “friendraising” events enabled the school to reach a broad audience.

They hoped to raise $200,000 that night in the paddle raise. A longtime supporter and lead donor pledged $50,000 and another $50,000 in matching funds as well as giving an impassioned plea to the 95 attendees. Thanks to the lead donor, NYHS raised over $400,000, more than double any previous gala record. That fundraising success confirmed their instinct that there was a better and leaner way to raise the needed funds for Jewish education. Last year was the second year of the NYHS Leadership Dinner, and they again exceeded their fundraising goal.

Hosting a kosher dinner in Seattle for hundreds of people is a very expensive proposition, running upwards of $50,000. This figure does not include the cost of school staff, who spend all of their time working on the gala. Both Torah Day School and Northwest Yeshiva High School saved a minimum of $50,000 each by eliminating or reducing their events.

Northwest Yeshiva High School had a motto, “All gala, all the time.” From November to March, they would be consumed with the details of putting on a gala. It was liberating to faculty, staff and volunteers alike to be able to focus more on daily cultivation of relationships with their constituents as opposed to a one-time blow-out event. While there are elements of the gala that are missed, the new model enables Feld to incorporate the student experience at NYHS into the Leadership Dinner in an impactful and authentic way. “At the gala, students used to sell raffle tickets or act as runners for the auction items,” Feld says. “At the Leadership Dinner, students sit with our donors to learn and engage in small groups and demonstrate what we do on a daily basis. They have a vital role at our Leadership Dinner. It is all for them after all.”

When asked if either school will ever go back to a gala model, their responses differed. Margolese said it is possible that Torah Day School will go back to a traditional gala or some other form of dinner. He noted that “no one should underestimate the level of creativity and buzz needed to do a virtual event well,” and that the dinnerless model could get old quickly for their donors, especially as more organizations implement similar online events. In Seattle, where there are no kosher meat restaurants, galas enable donors to enjoy an evening out with an opportunity to socialize over cocktails and a delicious kosher meat dinner. He also believes that without honorees, the school misses a chance to formally recognize community members who give above and beyond to the school.

Feld remarked that it is unlikely NYHS will go back to a gala in the foreseeable future. They are always looking for ways to change up the experience of the Leadership Dinner and to provide opportunities for their constituents to “know us, love us and support NYHS.” Each year, they have hosted the dinner at a different and fun location, including a co-working space and a boat house. This year, if the COVID-19 concerns do not force cancelation of the event, it will take place on a boat. More importantly, they now have more time to focus on getting friends into the school on a daily and weekly basis.

There is no doubt that coronavirus fears, regulations and economic uncertainty will shake up our fundraising models for the short term. The question that remains is whether those effects will last past this current year. Feld thinks they can and that “virtual learning and fundraising can make us more innovative. Now that we are untethered from the physical constraints of bell-to-bell learning, it is empowering to our faculty to think about innovative ways we can bring our supporters, community, friends and partners into what we do.”

We hope that we all weather this storm and that Jewish schools nationwide will have the freedom to try new models of engaging donors, with the aim of better supporting and sustaining our schools and enhancing the Jewish future.

Click HERE to view the original article as published in Hayidion, The Prizmah Journal 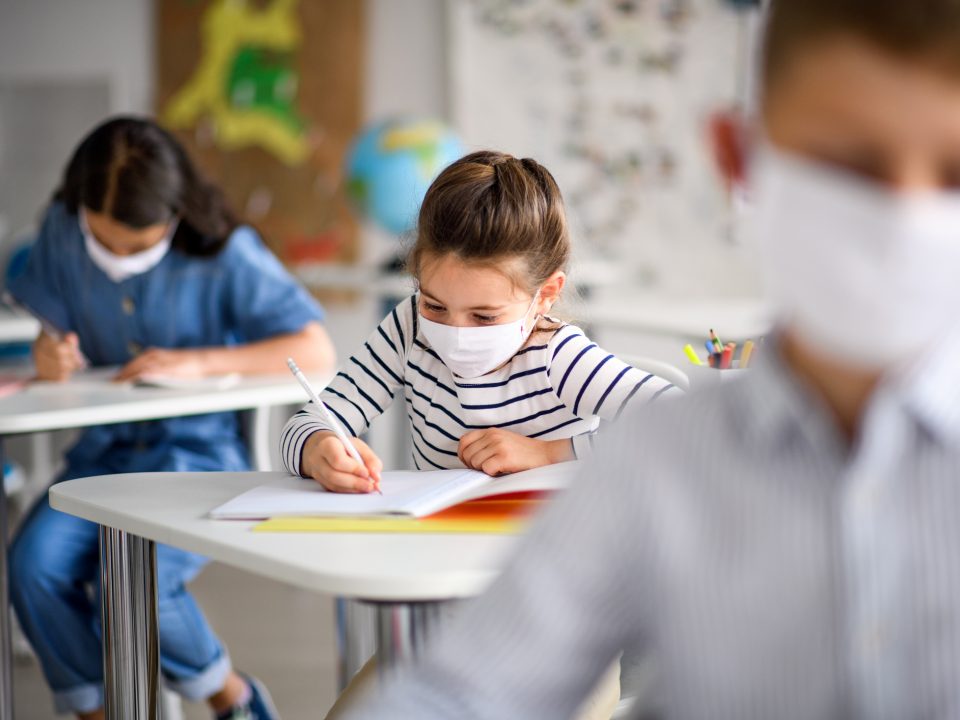 Small children with face mask back at school after covid-19 quarantine and lockdown, writing. 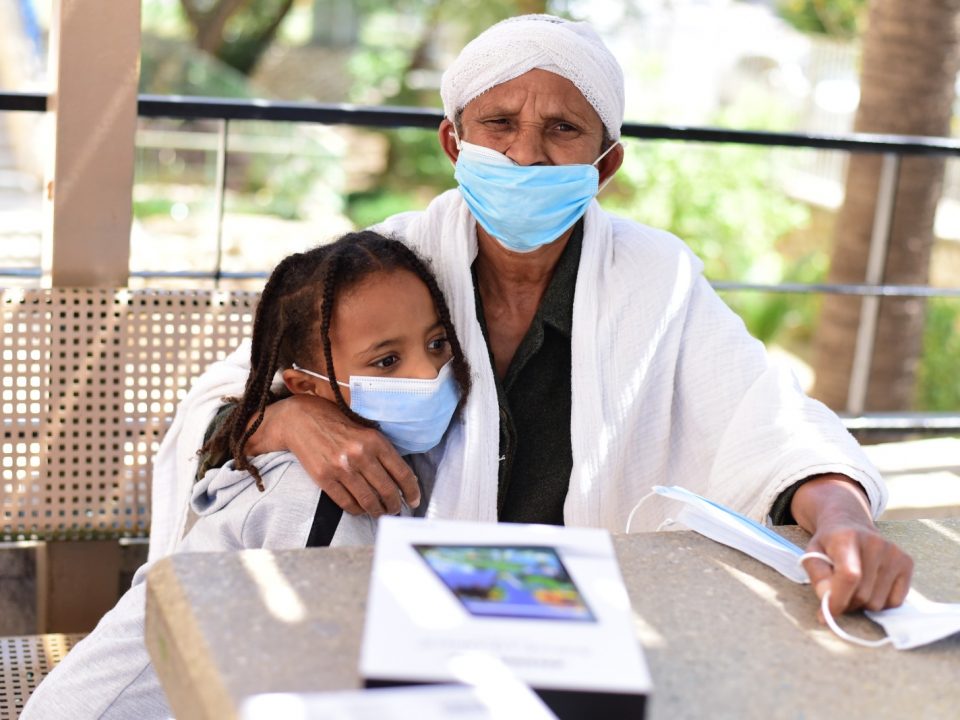